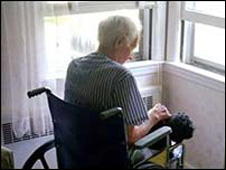 The use of anti-psychotic drugs in the elderly doubles the risk of potentially fatal pneumonia, say Dutch researchers.

A study of almost 2,000 patients found the increased risk starts soon after treatment begins and concluded that patients should be closely monitored.

An expert review published in 2009 found the drugs are overused in many cases and are responsible for up to 1,800 deaths in the UK every year.

Ministers have said they want to see a significant cut in their use.

The latest research published in the Annals of Internal Medicine compared the health records of 258 over-65s with pneumonia with 1,686 patients without the infection.

Of those with pneumonia, a quarter died within a month.

When they looked at prescribed drugs, they found current use of anti-psychotics was associated with a roughly two-fold increase in the risk of pneumonia.

Those on the newer types of anti-psychotic drugs were slightly less likely to have the infection than those on the older class of drugs but were still at significant increased risk.

The risk was found to start soon after treatment and increased the higher the dose of drugs the patient was prescribed.